Learn simple word-processing with our volunteers

Wordpad is a basic word-processor that has been free with every version of Windows since 1995. It’s also very good — so if you have a Windows computer, it’s worth searching for.

Our volunteer team today will help you get started with Wordpad — and help you do something that looks difficult, but is really quite easy — adding photographs to your document.

Voice Recorder is a very simple Windows app for recording voice — yours and anyone else close to the microphone. Our volunteer team will show you how to do it.

You can blog your photos easily. Blogging documents and voice recordings is not so easy, but we can do it for you later.

I have written an app for playing Music for dementia users.
It is now on Google Play, for Android mobiles called Dementia Player.
Dementia Player.1 is for older android mobiles and tablets. https://play.google.com/store/apps/details?id=com.thunkable.android.adams1stephen.DemPlayer1

Dementia Player.2 is for the ones with Kitkat (4.4) operating system or later. https://play.google.com/store/apps/details?id=com.thunkable.android.adams1stephen.DementiaPlayer2

Explanation is on the web site.

Once set up, dementia users can press a flashing coloured square and get one of 9 songs, of their choice.
It is free to use, asking people if they like it to donate to the Alzheimer’s Society UK.

I have bought a USB extension cable for one pound at the overflow shop in Mare Street.

This is 5 metres long and enables me to put my phone on charge on the nearest table, rather than on the floor next to the nearest power socket.

The USB lead you get with the phone is usually only 1 metre long, so everyone puts their phone on charge near the socket. This leads to people stepping on it and damaging the socket when it gets accidentally pulled out.

Putting the extension cable in the charger and the other end having a socket to take the charger cable (this works for Apple as well as other Android phones) gives you plenty of cable to put it safely on a table or out of the way.

Supports people to find and use dementia-friendly touchscreen apps 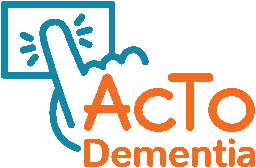 AcTo Dementia provides recommendations and guidance on accessible touchscreen apps for people living with dementia. This website is an ideal resource for anyone with a diagnosis of dementia, or anyone looking to support a person with a diagnosis, to find and use apps on a tablet computer for entertainment. We are a group of university researchers unaffiliated with any app developers and all of our recommendations have been through an evidence-based review process.

This is a website from Sheffield University which is  looking  into touch screen applications for dementia users.

There is a number of recommended apps.

There is also a forum, which I have joined, to communicate with the researchers, as it only had two messages in it. I doubled the number of messages about apps by listing the two apps I have been looking at and tested with my wife Elly who has dementia.

I would ask other drop-in users to use the site and make suggestions as to how apps could be developed.

I enjoy learning how to use the computer.

I would like learn how to use Google Drive.

The reason why bringing my own laptop is because when i come at 50+drop in i can learn the computer more when am at home and i make a mistake i just close the laptop down! so am glad to be here when i can make it

This what you do if you change the camera option from “Camera” to “Video”.

You can record moving images and sound like this!

Today I have been learning to use Whatsapp on my phone. I have sent two messages and had a reply.