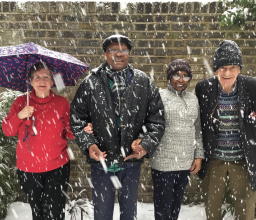 Are attitudes to ageing keeping up with growing life expectancy?

TEDx video talk in the library –

We take a proper look at what it means to grow older today and how we can make ageing more fulfilling.

In her talk Ashton Applewhite states ‘Let’s end ageism’, Paul Tasner explains ‘How I became an entrepreneur at 66’, Laura Cartensen argues that ‘Older people are happier’, and Susan Pinker suggests that ‘The secret to living longer may be our social life’.

Local initiative Hello Hackney has been introducing seniors to technology as well as providing a social hub. Rick Crust joins us to explain how it works. Sarah Douglas and Hector Dyer from Liminal Space will introduce their research-based project about ageing ‘Unclaimed’ in collaboration with the Wellcome Trust.

It’s not the passage of time that makes it so hard to get older. It’s ageism, a prejudice that pits us against our future selves — and each other. Ashton Applewhite urges us to dismantle the dread and mobilize against the last socially acceptable prejudice. “Aging is not a problem to be fixed or a disease to be cured,” she says. “It is a natural, powerful, lifelong process that unites us all.”

How I became an entrepreneur at 66

It’s never too late to reinvent yourself. Take it from Paul Tasner — after working continuously for other people for 40 years, he founded his own start-up at age 66, pairing his idea for a business with his experience and passion. And he’s not alone. As he shares in this short, funny and inspirational talk, seniors are increasingly indulging their entrepreneurial instincts — and seeing great success.

In the 20th century we added an unprecedented number of years to our lifespans, but is the quality of life as good? Surprisingly, yes! Psychologist Laura Carstensen shows research that demonstrates that as people get older they become happier, more content, and have a more positive outlook on the world.

The secret to living longer may be our social life

The Italian island of Sardinia has more than six times as many centenarians as the mainland and ten times as many as North America. Why? According to psychologist Susan Pinker, it’s not a sunny disposition or a low-fat, gluten-free diet that keeps the islanders healthy — it’s their emphasis on close personal relationships and face-to-face interactions. Learn more about super longevity as Pinker explains what it takes to live to 100 and beyond.